Germany is a member state of the European Union as well as the Schengen Agreement. It is a great country for hitchhiking, both on motorways (via on-ramps, service stations, more seldom - parking lots) and local roads. Germans are a little bit suspicious, but nice if you get to know them. Thumbing makes it easier for them to say "no", because they do not even have to look at you. Those who will stop are often people who hitchhiked themselves when they were younger. Many of them have families, jobs and fast cars now. Because of the absence of speed limits on many motorways it's a good country to hitchhike long distances in short time.

To hitchhike efficiently in Germany it is good to know the three different kinds of roads between cities and towns. By descending speed these are:

Their use in hitchhiking is different and explained below.

The autobahns in Germany are the fastest links between cities. Their numbers consist of an A and the number of the highway. On traffic signs the A is not mentioned but they can be distinguished by the blue colour of the sign.

The lack of a general speed limit is something most Germans are proud of demonstrating to you and what makes them the best choice for longer distances. Subsequently walking and hitchhiking is illegal on the autobahn and the emergency lane.

As a general rule, you should always stick to the Autobahn as long as possible and try to change between major autobahns as little as possible, even if this means some detours. As soon as you are on the Autobahn and travel between service stations, you are hitching fast and reliable. For more information about this kind of hitchhiking, see the article on petrol station hitchhiking.

As trucks do not travel faster than 90 km/h you might want first try to get a ride hitching a personal car before asking truck drivers. Trucks are great for a night-ride; however, there are restrictions, like in France, of when trucks are allowed on an autobahn. In Germany most trucks aren't allowed on motorways on Sundays or public holidays before 22:00. As most truck drivers stop earlier truck traffic already gets less on Saturday afternoons.

If you travel a specific autobahn, have a look at the autobahn page where you can find very specific information and hints about hitchhiking on German motorway ramps, etc. - for example, the route Amsterdam–Berlin along the A2 and A30.

Getting onto the autobahn

To get onto the autobahn either hitch a ride from a city, thumb at the on-ramp before the sign or go to a service station by public transportation and walk there. A good possibility is to look for a street with traffic lights that leads to an autobahn. Wait for the red light, then knock at the windows (do not forget to smile!) and ask for a ride. If you look neither like a homeless nor like a drug dealer, they will be happy to help you.

You have various possibilities for being dropped off along the autobahn to look for your next ride. As petrol station hitchhiking is faster, try to avoid being dropped at on-ramps where you have to thumb. On the autobahn, it is preferable to be dropped off at a service station instead of a rest area as rest areas have much less cars stopping.

The Raststätte is the usual choice for hitchhiking because most cars tend to refuel there. Make sure your Raststätte has not just a restaurant but also a petrol stations because more people stop there and they leave quicker. Most Raststätten are on both sides of the autobahn and there is often a bridge or tunnel nearby to cross. Therefore you might consider hitchhiking to a Raststätte in the opposite direction first to get onto the highway quicker. At the entrance of the petrol station shop there are usually map stands that show the surrounding area and other service stations in Germany.

With a few exceptions all service stations can be entered by foot from the side and feature an unlocked door in the fence or wall.

The off-autobahn Autohof is a local fuel station that is marked on traffic signs on the autobahn. Food and fuel is cheaper there but most car drivers don't bother and thus mostly trucks stop there. This means that they are okay on weekdays but have to be avoided on Saturday evenings and Sundays at all cost. Another disadvantage for continuing on the autobahn is that local traffic also stops at the Autohof.

The federal Bundesstraße roads are indicated by yellow signs and carry numbers like B6 or B49. Like in the case of the autobahn the B is not written on traffic signs, but federal roads can be distinguished by the yellow colour of the sign. As they are smaller and carry more local traffic they should only be used to get from and to the autobahn, though there are a few exceptions to the rule.

Their general speed limit is 100 km/h and they usually have no emergency lane so they are difficult to thumb. To get a ride either try petrol stations or choose a place where have a lot of space to see you and stop or where they are going slower, e.g. town exits. Police might consider it illegal to thumb in sites where cars cannot stop without putting the traffic in danger. 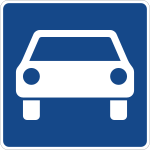 To make it more complicated some of the Bundesstraßen are a so called Kraftfahrstraße. For them most of the Autobahn-rules apply (e.g. no pedestrians and bikes allowed). You can recognise a Kraftfahrstraße by the sign of a white car in front of a blue backround.

These roads are not numbered on traffic signs and usually connect minor towns. As most of them have lower speed limits thumbing is likely to work. As they might not have a lot of traffic coming through they should only be used for getting from and to you final destination.

When hitch hiking towards and from Belgium, be carreful passing the Ruhr area (Dortmund, Essen, Duisburg). Once you get in, it's difficult to get out. Raststättes are rare and passing traffic avoids this region. We tried on several places and had to take the train to pass this area (lost 5 hours). There are sufficient work arounds to avoid this area. See also the hitchwiki page of the Ruhr Area.

Hitchhiking in general is legal in Germany. It is only forbidden to hitchhike on the Autobahn itself, meaning you standing on the autobahn or its emergency lane. It is also forbidden to walk on a Kraftfahrstraße. You are perfectly fine stopping at service stations and asking the people but keep in mind that service stations are private property / leases. It occasionally happened that owners try to get rid of hichthikers at "their" service station. If that happens, just move to the parking space and hitchhike there. If you want to start hitching at the on-ramps, make sure you stand before the rectangular blue sign indicating the start of the autobahn.

Just like other people, police may or may not be friendly towards hitchhikers. It is said that police controls are more frequent in the southern states of Bavaria and Baden-Württemberg. As a foreigner you have to carry your passport at all times; a national ID card is sufficient if you are from another EU country. If you are being checked, be friendly, show it to them and they will leave you alone.

You can determine where a car is registered by its number plates. While tehre are certain plates on rented cars. (Europcar has „HH“ (Hamburg), Avis – „EU“ (Euskirchen), Sixt – „M“ (Munich), Hertz „DN-H“ (Düren)), other plates are associated with areas - DE, EN. The first letter is usually the district where it is registered. In addition, there is a little patch beside the number which tells you what state that number plate belongs to, which is useful if you do not know the district letters.

There are between one and three letters on a license plate which show the city or region where the car is registered. For example, look for license plates starting with B if you're hitching to Berlin. Have a look at the articles on Wikipedia for more information: German car number plates (in English) and Liste der Kfz-Kennzeichen in Deutschland (in German).

Note that it is no longer required to change plates if you move, so a HH (Hamburg) car may very well belong to someone living in München (M). At the moment this is not yet a big problem, but in due course it may lead to the situation that license plates become as useless as those in many other countries for determining the direction a car might be going... Tiziano hitching from Berlin to Munich

On the website: www.autobahnatlas-online.de you can find detailed listings of all Autobahnen, with all drive-ups, interchanges, all types of rest stops, tunnels, and bridges along their ways, with exact kilometer allegations. This comes along handy when hopping from station to station.

On a longer journey with several route options, this map showing the traffic volume of the different highways might help you deciding which could be faster due to more traffic.

For those using mobile app MAPS.ME, you may download a .kml file with all the service plazas for viewing on your map offline. Considering Germany is extremely well mapped on OpenStreetMap, these locations can be assumed to be very accurate and up-to-date. You can view the data extract here and click Export > Download as KML and then open the .kml file on your phone to be loaded in MAPS.ME

Despite German being the major language, (with over 95% of the population speaking it as a first language [1]) you will find that many Germans speak English or French as a second language. Other common languages in the country are Turkish, Russian and Arabic.

The basic hitchhiker needs can be satisfied by a look at the phrasebook here.

When asking your drivers for help it pays off to know that the German word Straße for street contains the weird letter ß which looks a bit like a B. If you pronounce it like an s Germans will understand you. Contrary to popular belief the diacritics on Ä, ä, Ö, ö, Ü and ü are not metal umlauts and thus they do affect pronunciation. If in doubt try to pronounce the word as if the diacritics didn't exist. For instance, if you pronounce the city Würzburg as Wurzburg you will probably be understood.

German cities with more than 100.000 inhabitants

If you search cities with less than 100.000 inhabitants, have a look at the seperate Federal State articles. You find them at the bottom of this page.