Copenhagen (Danish: København) is the capital of Denmark. 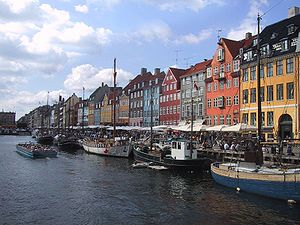 There are 2 ways to go to Sweden from Copenhagen, one being across the bridge to Malmö and one being north to Helsingør and then with the ferry to Helsingborg. If you choose the option towards Malmö then use one of the options below. If you're hitchhiking from Germany or elsewhere in Denmark, it's probably easier to first get to the airport and then find a ride going into Sweden, rather than trying to get a direct ride from before Copenhagen.

The best spot to hitchhike to Sweden is probably at Kastrup Airport. Take the metro to the station "Lufthavnen / Copenhagen Airport", leave the terminal on the other side of the metro exit to the large parking lot and then go to the roundabout at the end, next to McDonalds/Netto/Statoil. Just after the roundabout there is a bus stop were the cars are able stop, which makes it a good place to hitchhike from. You will also be able to keep an eye on the petrol station and hopefully spot some cars with Swedish plates from that place. This hitchhiking spot has been used regularly by Öresund hitchhikers and was also the winning choice in a Copenhagen-Malmö hitchhiking competition. If you are in a hurry you shouldn't accept rides that are shorter than Malmö, since it could be difficult to catch a ride along the motorway. Always try to stay out of Malmö's motorway network and if possible prefer to follow your driver into Malmö center if there's no other alternative. It's much better to hitchhike Malmö's good spot (McDonalds at Stockholmsvägen) than the highway system. If you want to travel further up in Sweden you should check out the advices given in the Sweden(Malmö)section.. (This spot was used for Malmö in July 2018 and just waited 20 min for a ride!) Under the airport there's a train station with trains going to Hyllie station and then to other stations in Malmo, so use it if it's the only option left. There might be a ticket check on the train, so if you're like me, you risk facing a giant fine, but in my case luckily a cute girl checking tickets did nothing. They check your ID when you enter the station in Copenhagen and when you exit in Sweden due to the immigration issues.

On the road to Malmö, leading to the bridge, you might be able to hitch a ride. To get to this spot take a regional train to Tårnby from Copenhagen Central station. The slip road to the bridge is on the opposite side of the road to Tårnby station. Not much space to stop but as traffic lights cars are going slow and get chance to think about it!

You can also take a train to Sydhavn, only 2 stops after the main station and hitch on Sydhavnsgade. We hitched before the shell service station because it was a weekend and a business carpark entry was closed. We also saw people with a sign just after shell. Its a good road. We had a lift on Sunday afternoon after 15 minutes.

Malmö ring road for those heading north toward Gothenburg or Stockholm

Bear in mind that the Malmö ring road has no good places for hitchhike on it. There are a few on ramps with gasstations but at all of them getting stuck happens somewhat easily, ofcourse you will always find a ride somehow. One option that can work well is if you are heading further north and get a ride towards Lund (20 km from the highway) it is possible to accept the rideoffer to Lund and get dropped of in the northwest end of Lund and hitchhhiing north west from Lund back to the highway. This works really well and quickly in comparison to the ringroad onramps.

Another option for going to Sweden is heading north to Helsingør and catching the 20 minute ferry to Helsingborg from there.

Take bus 4A and get off at Vibenshus Runddel. On Lyngbyvej the cars have lots of space to stop, and the road becomes a highway shortly after. There is not at lot of traffic on the small on-ramps on the way to Helsingör, so try to get a ride all the way from Copenhagen to Helsingör. A sign might be of use.

It cost around 29 kr. (3,90 euro) to walk on the ferry, but you can hitchhike a ride onto the ferry, often finding a direct ride to Gothenburg or Stockholm, by standing in front of the ticket booth with a sign of your destination. the cars pay for 9 passengers included in every ticket, so they can take you for free onto the ferry.

West towards Roskilde, Fyn or Jylland

There are several ways of getting out of Copenhagen. Just make sure you do not get stuck at Køge. If you do get stuck at Køge, your best bet is the Tesla Supercharger Station behind the gas station, or at the top of the on ramp immediately east of the last roundabout. Heading west you have the following options:

Catch either S-tog A, E or F and get off at Ny Ellebjerg station. Walk through the little alley on the south side of the station called 'Pylestikket'. Turn right on the main road and after a few hundred metres you'll reach the road Folehaven. There you'll see a few traffic lights to slow down the cars. Cross the road and there's and plenty of space for cars to pull over. There's even a new official hitchhiking stop ("Blafferstoppested") close to Folehaven 84, but there are only few cars passing by. So better walk pass it a few hundred meters and you'll see the petrol station mentioned before close to the beginning of motorway 21 (there is a traffic light, so the cars are slow) or try one of the many busstops.ColAlf experienced that this option is good when heading towards Roskilde or catching a ferry to Jutland from Sj. Odde or Kalundborg (see below). If nobody stops, you could also walk some 100m behind the traffic light to the hard shoulder where the motorway begins. In case they are not going in the direction, where you want, ask them if they can drop you off at Karlslunde petrol station - a good petrol station, before the highway splits south and west. Hitchhiking spot at Folehaven/Vigerslevvej, an option is to stand on the hard shoulder at the beginning of the motorway you can see in the background

An easier way to get to the same spot mentioned in option 1 is to take bus #A1 Avedøre to Folehaven/Vigerslevvej. There' you'll see the crossing to Folehaven which is the beginning of the motorway 21. Additionally you can take to following busses also going that direction. Make sure you get out at Folehaven/Vigerslevvej: bus #10 Flintholm St., #133 Avedøre St., #65E Avedøre St. There's a petrol station some meters before the crossing. You'll also find a bus stop where you can stand on, or just pull out your thumb on the hard shoulder next to the street. A sign saying the direction might be helpful. Keep in mind that traffic might be pretty fast here already, but nevertheless platschi got rides here twice within 5 minutes. For this spot, see the image on the right.

One way out of Copenhagen which we found quite quick was to catch the suburban train from Copenhagen Central Statio to Tärnby. There is an entrance to the E20 headed west there, on the same side of the road as the train station. There is not lots of space to stop but as there are traffic lights the cars are going slow and get chance to see you.

Take the S-train or walk to Dybbølsbro station. Walk towards the Fisketorvet mall, and just before there will be an on ramp to the highway. This is another one of the 4 official hitchhiking stops ("Blafferstoppested") in Copenhagen.

Catch a regional train or the metro M1 and get off at Ørestad station. Walk across the parking area of Field's and you'll find the first on-ramp. Be aware that there are two on-ramps joining each other when heading west - make sure to be on the most busy one.

Use one of the before mentioned options for going west, or another good option is to take the S-train to Sydhavn and walk south on the Sydhavnsgade, there will be places for cars to stop next to the road, at the Circle K petrol station or at the busstop (Sluseholmen). There is a big petrol station called Karlslunde V before the motorway splits towards west and south. If you get a driver going west, you can jump off here, and find a car going towards Rødby. Have in mind that most people are going west. Taking the ferry at the port of Rødby, which sails to Puttgarden in Germany is the quickest way to get to mainland Europe. In case you get a ride in a car, the price of the ferry remains the same for a car with up to 4 people, so you don't have to worry about any extra payments that the driver may have to make because of you. It is preferable to find a car going with the ferry to Germany before reaching Rødby, as the ferry operator (Scandlines) sometimes will tell you to go away, even though it's before the check in.

Most trucks going anywhere in Europe (including Great Britain) will go this way.

Great spot for dumpster diving on the way

If you get stuck in the area or just get hungry, then at this spot - E20, highway exit 59, Fredericia S (First highway exit on Jutland). You can find two supermarkets ALDI and REMA 1000, where to dumpster dive in + a Statoil, where to wash everything. And small forest/bushes, where to stay for the night.

Both from Malmö, Sweden, and from Hamburg, Lübeck oder Rostock, Germany, it is a good idea to get out of the car at the Airport. From there you can get to the city center by metro. Tickets are 35 DKK (about 4,60 €).

Ferry between Sjælland and Jylland

Hitching a ferry between Sjælland and Jylland is possible, too, as you don't pay per person but per car on the ferry. Option #1 mentioned above is probably the best way for getting a car towards Holbæk and further on to Sj. Odde or Kalundborg. Ferry timetables can be found at Mols-Linien but they run quite frequently. Be aware that the ferry from Kalundborg is very slow (about 3 hours to Aarhus).